The Mayor of Woking visits Birchmere

At Birchmere things have recently been very different from normal. Due to the Covid lockdown, the campsite, as with most other recreational sites, has been closed to visitors. This was obviously, for a busy and popular site, a great shame. However it did give the campsite maintenance team a window of opportunity to set about a whole load of projects that were in the pipeline.

So over the past months the team of six have spent every Tuesday and often many other days dealing with the list of suggested improvements. Obviously, apart from a Government grant, the campsite income was reduced, so most of the time was spent reusing or reworking existing materials.

Our present Mayor of Woking had been to the campsite before when we were considering changing our old activity room, the DRT Hall, but this had been a few years ago. Now was the time to invite her to see the changes.

So, Tuesday 29th September was a very special working day with the Mayor of Woking, Cllr. Beryl Hunwicks kindly giving up some time to visit the campsite to meet the team of six. 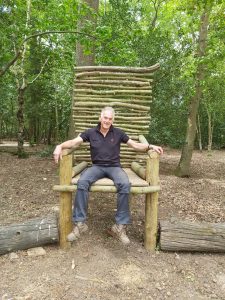 The Mayor spent time catching up with the campsite’s improvements over the past years especially the two new activity rooms, Birch Lodge and The Retreat, the work being undertaken at the moment and the plans for the future. She was taken on a tour of the campsite, where she was particularly impressed with the campfire area with its “Giants Chair”. The Mayor then saw the recent changes which the team had achieved. She was very keen to hear about the planned new adult toilets and showers that would be in place by the spring of next year.

All too soon the visit was over and after a full hour and a half The Mayor departed for her next venue. The members of the campsite team were really heartened by Cllr Hunwicks’ enthusiasm and support for the campsite, and indeed for Scouting in Woking as a whole, and thanked her for spending time with us at Birchmere.